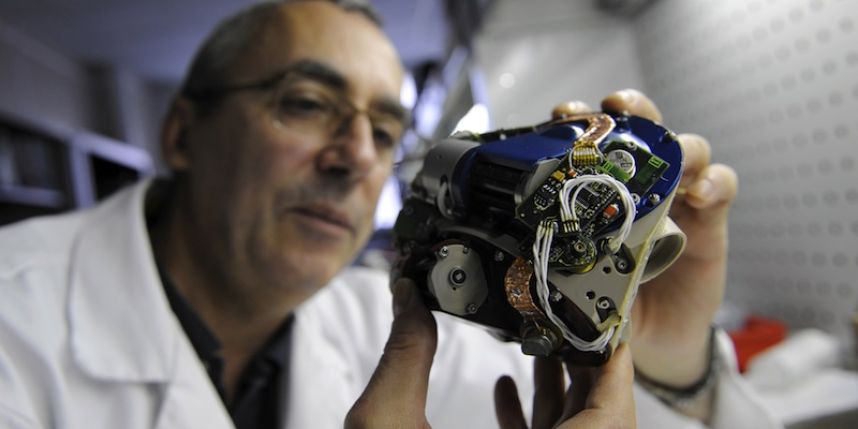 2021: Breaking news: Carmat has received a CE Mark that will allow it to implant its artificial heart into suitable patients in Europe. It expects to begin its commercial launch in Q2 2021 with its initial focus in Germany and France. Furthermore, the FDA will allow the company to begin implantations in the US in an Early Feasibility Study.

The company emphasizes the three unique features of its artificial heart — pulsatility, autoregulation, and hemocompatibility.

Although left ventricular assist devices have been around for decades, French biotech startup Carmat has made waves with its development of a totally artificial heart with the goal of lasting at least five years. This total heart prosthesis may become the second best option to receiving a donor heart (and the supply of hearts is quite limited.) See this video that shows the internals inside their device.

Carmat was tight-lipped since their first patient died in early 2014 after surviving only 75 days. Their second patient, a 68 year old man, went home in January 2015 and had been pedaling his stationary bike like mad. He died in mid-2015 having lived a normal life for 9 months. Their third patient was implanted in April 2015 and survived to November, 2015.

The company's 2016H1 results (September, 2016) announced the initiation of their twenty patient PIVOTAL clinical trial. This patient population had a higher baseline status than did the no-option, terminal heart failure patients implanted from 2014 through 2016.

In April, 2018 Carmat announced it had completed six more implants in its PIVOTAL study toward the goal of obtaining a CE Mark in 2019. All these patients had survived at least one month. In 2018 Carmat also opened a new, automated assembly plant near Paris to manufacture its prostheses. And, in September, 2018 they announced a second assembly plant that will be capable of producing up to eight hundred artificial hearts per year. This obviously reflects their great confidence that the product works.

In October, 2018 Carmat announced their 2018H1 results and progress to date. In a very encouraging update, Carmat stated that they had implanted eleven patients in their PIVOTAL trial with only one patient not having survived for 30 days. On average, their patients are out of the ICU in 6 days and return home in 35 days. They had expected to qualify for CE marking in 2019 (with subsequent marketing in Europe.)

In January, 2019 Carmat announced their 2018H2 results and progress to date. Again, a very encouraging update — seven of their patients have survived for at least six months (or until having received a donor heart.) After tweaks in manufacturing, implantation will continue in April, 2019 with the expectation that twenty patients will've been implanted before CE Marking in 2020. (Carmat expects to be implanting American patients under an FDA IDE in 2019.)

In a string of announcements in September, 2019 Carmat announced that their longest lived patient has been supported by a Carmat heart for 18 months. They are resuming study implantations at their Danish center and have received approval for five prospective implantations in the US under a device exemption. They are also doing a 120M euro capital raise to sustain them during further development.

The Carmat heart story was widely covered and (miscovered.) Some writers commented that "it'll be too expensive — at an estimated cost of $200,000."

No! 200K is rounding error compared to OR and ICU charges for many terminal heart patients. Besides, the value of a human life is > $5 million — about $100,000 a year (per the statisticians.)

Also note that women's heart disease starts on average ten years after men's. Go visit residents in a senior facility (an "old folks home.") The vast majority are women — most of the men died from heart attacks years before.

Bridge to transplant — for many patients awaiting a donor heart, the Syncardia artificial heart has been the best solution. It's been implanted in 1400 patients enabling many to go home.

Another of my favorite cardio-companies is Heartware, maker of left ventricular assist devices (LVADs). Heartware was acquired by Medtronic in 2016. And, see these inspiring stories of patients implanted with their devices.

In this remarkable 2018 video we get a 360 degree view of a heart transplant including midline sternotomy and insertion of the donor heart.

I frequently hear stunning bioengineering breakthroughs at Stanford from visiting investigators and our own faculty in biomechanical engineering, material science, and regenerative medicine.