Every Spike from Every Neuron

So, what was the big deal?

I started drafting this story in November of 2012.

In February of 2013, the proposal made front page news, when it was made public that this was the very proposal that inspired President Obama's scientific moonshot in his January, 2013 State of the Union address — the Obama Brain Initiative. See John Markoff's NY Times piece.

So, this is the story I wrote three months before it was announced at the State of the Union. How was I so clairvoyant? A combination of paying close attention and luck!

(What follows is my original write-up drafted in late 2012 and published in early January, 2013.)

Note that all the authors are affiliated with or are consultants to the Kavli Foundation, founded by inventor entrepreneur Fred Kavli. Kavli is one of a number of billionaire philanthropists with an intense interest in accelerating neuroscience research.

Common to all these efforts is the creation of cutting edge tools that combine neuroscience, computer science, and bio/nanotechnology (imaging and manipulation of matter at the molecular scale).

The essence of the BAM proposal is to create the technology, over the coming decade, to record every spike from every neuron in the brain of a behaving organism.

While this notion seems insanely ambitious, coming from a group of top investigators, the paper deserves scrutiny. At minimum it shows what might be achieved in the future by a combination of nanotech and neurosci.

In January, 2013, as I publish this, two European Flagship projects have just received funding for one billion euro each (1.3 billion dollars each).

The Human Brain Project is an outgrowth of the Blue Brain Project, directed by Prof. Henry Markram in Lausanne — it seeks to create a detailed simulation of the human brain.

The second project — the Graphene Flagship, based in Sweden, will explore uses of graphene for, among others, creation of nanotech-based supercomputers. The potential synergy between these projects is a source of great optimism.

The goal of the BAM Project is to elaborate the functional connectome of a live organism — not only the static (axo-dendritic) connections but also their functional activity in real-time as thinking and action unfold.

This proposal trumps even those ambitious projects in sheer bravado.

Spikes are the Brain's Currency

Not much is known with absolute certainty in the brain, but this is — the brain communicates long distance information with (and only with) neural spikes. This is true whether you're a fruit fly or a human.

Neural spikes are amazing! Hold a 1½ volt flashlight battery in your hand. Just 1/15 of that voltage would be 100 millivolts, about the size of a neural spike or action potential.

In its resting state a neuron maintains that huge charge separation across a cell membrane that's just a few nanometers thick. It's a fire cracker waiting to explode! 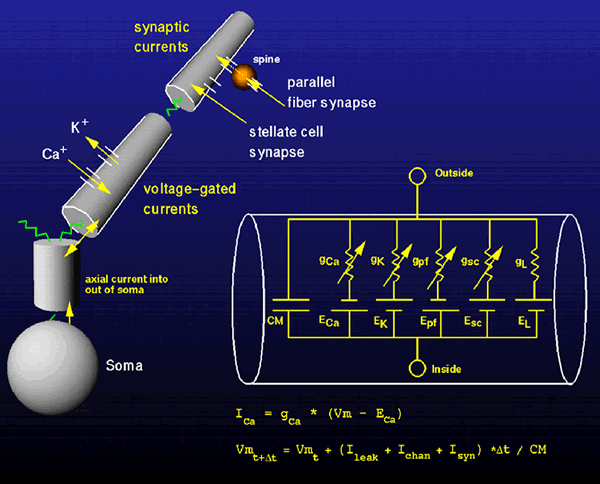 When a neuron is charged and spikes, a huge amount of energy is expended, so evolution has made sure that neurons only spike when they need to. Even so, the brain incurs a huge metabolic cost generating spikes.

So, neural spikes are as precious as gold. If you want to understand the brain, follow the money: the neural spikes. They tell you what's happening, where, and when.

Now here's the central difficulty of brain science. The tools in 2013 are not yet up to the task of following all the neural spikes. Functional MRI (fMRI) is too slow and too coarse to decipher neural spikes. fMRI has a time resolution of several seconds - thousands of times slower than a neural spike, which takes only about 1 millisecond (msec). Furthermore, each voxel in fMRI is typically about 2 by 2 by 4 mm on a side or 16 mm3, intractably big considering that each mm3 contains roughly 50,000 neurons, ie about one million neurons per voxel. Understanding the brain by looking at fMRI is like trying to understand human civilization by looking from earth orbit at the heat or light given off by cities. (But, like satellite imagery, with fMRI you do get the big picture.) 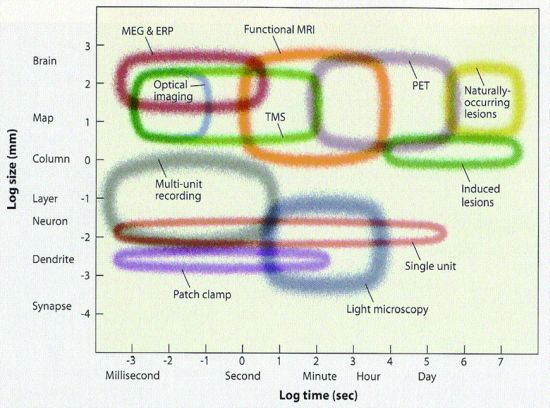 In contrast to fMRI, electrical recording is far faster, eg recording EEG or, even better, recording from single units (neurons) as they spike. But EEG has even worse spatial resolution, about a cm, than does fMRI (and, of course, single unit recording with electrodes is usually only done in lab animals).

Enter calcium imaging, as in this video from MIT Prof. Feng. Every time a neuron fires, it glows green (from the GFP, green fluorescent protein, grown inside). The video shows neurons firing in a brain slice kept alive in a petri dish.

But, note one big problem — the brain needs to be sliced to see the light given off by each neuron firing. How do you see neurons firing beneath the surface of an intact brain? The human neocortex alone is 2 to 4 mm thick, so how would you ever see the spiking pattern of a large collection of neurons? (As a separate matter, much of the action in human brains takes place several cm deep inside subcortical regions like the thalamus and basal ganglia, where the only hope of monitoring the action is with either fMRI (too slow) or microelectrodes (too invasive).)

Enter 2 photon microscopy. Invented by Winifried Denk (who shared a million dollar Kavli Prize in 2012), 2PM (two-photon microscopy) uses red-shifted light from two simultaneous laser beams that intersect at the region of interest. 2PM greatly increases the depth of imaging possible in living tissues up to about 1 mm.

For deeper structures, we still need microelectrode arrays of various sorts, since they are out of range of microscopes. Microelectrodes were traditionally either single shank (one shaft) wires or glass pipettes drawn to very fine points. But in this area, too, huge progress has been made. Researchers now use multi-shank arrays of electrodes, as in the figure below. Some current arrays also incorporate optical fiber bundles. 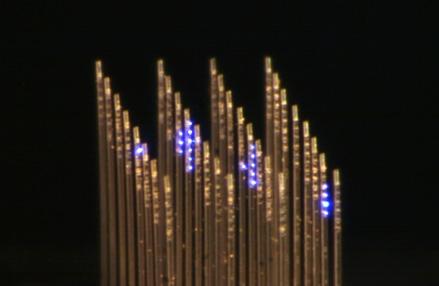 Finally, to figure out how the brain accomplishes perception, cognition, and behavior it's extremely informative to be able to turn key pieces of the machinery on and off. Without this ability it's hard to claim that a given neural circuit actually causes a given phenomenon (rather than simply being a marker).

A key tool in reverse-engineering the brain is optogenetics in which light-sensitive opsins from algae are genetically inserted into mammalian neurons. Once modified, the neurons can be turned on or off literally at the flip of a light switch. Entire circuits can be activated or silenced to make mice (eg) walk, turn, or sleep.

My son, Sean (trained as a molecular biologist) and I were first introduced to this when we heard Stanford optogenetics pioneer Karl Deisseroth present his work in 2006.

Here Karl presents optogenetics to a lay audience at Stanford.)

MIT Prof. Ed Boyden, who collaborated with Karl, is another star of optogenetics. (Here Ed presents optogenetics at SPIE and here in an Allen Institute YouTube.)

The most challenging aspect of neuroscience is obtaining fast, real-time monitoring of a broad swath of deep brain structures. (Recall that fMRI is too slow and too coarse. But, at least fMRI shows us the "big picture" — the entire brain.)

The version of the BAM Project that made it into Neuron just hints at possible methods that are elaborated in the longer draft version. Also see this article on cutting-edge neuroscience tools by Google researcher Tom Dean.

This is nanotech on steroids. 1) Nano-sized RFID tags that derive their power from the same externally applied fields used to read their data (on neuron location and spiking history). Early versions would be implanted. Later versions might migrate intravascularly . 2) Quantum dots and diamondoids that amplify voltage-sensitive dyes to increase emissions used for monitoring activity.

(But please note: just because I'm enthusiastic about the overall proposal, doesn't mean my enthusiasm extends to all the proposed techniques. They range from credible extrapolations of the present to those straight out of b-grade sci-fi.)

It seems apparent that reverse-engineering the human brain (and building new and improved versions) is an irrestible scientific attractor that's drawing in the money, talent, and tools to make it happen.

The European Flagship Human Brain Project may create the computational capability to simulate large, realistic neural networks. But to compare the model with reality, a real-time, functional, brain-wide connectome must also be created. Nanotech and neuroscience may be mature enough to justify funding this proposal.

(See this PBS News Hour interview of NIH's Director Francis Collins, a BAM enthusiast. But note that reservations abound: "too expensive in these austere times, too much focus on one highly speculative approach, difficult to apply to humans, etc." I made a bet that BAM will yield crucial breakthoughs, although my payoff date is in 2027.)

Addendum: March, 2013. Here's an article showing the state of the art of whole brain functional imaging in zebrafish larvae.

Addendum: April, 2013. In early January, 2013 I had a lengthy correspondence with my friend Stanford Prof. William Newsome about the pros and cons of this proposal. (In November 2012 I had circulated this to a moderately (and perhaps justifiably) skeptical Stanford neuroscience faculty.)

Then, imagine our surprise when NIH Director Francis Collins tapped Professor Bill
(with the brilliant Cori Bargmann (HHMI and The Rockefeller)) to direct the project's working group !