In the Heart of the Amazon
With Steve Pinker 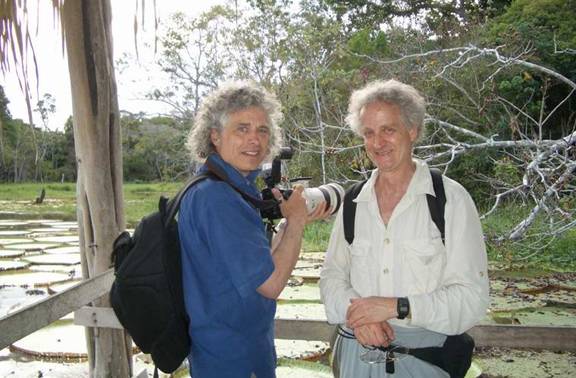 Let's get one thing clear — I hate traveling. (My Match.com profile used to say "biking distance only!")

Look up the etymology of the word TRAVEL —  it means “to toil or labor,” (as in TRAVAIL.) It's been acknowledged for centuries — travel sucks!

Moving meat around is such a 2nd millennium thing — photon transport is so much more efficient.

Edwin Newman, the renowned newscaster, had it right in his 1974 bestseller Strictly Speaking when he devised the following travel innovation .

Newman's proposed TRAVEL SIMULATOR was to be a "recreation" area in an airport where budget travelers could experience the “joys” of travel on a shoestring.

In virtual reality, they could sit interminably, simulating being bumped from overbooked flights. For an extra fee they could rock nauseatingly to simulate sea cruises or be insulted by haughty waiters with French accents.

Of course, having luggage simply thrown away would always be included, as would be the de riguer provision of diarrhea-inducing food and drink.

So, I was all set to enjoy spring in California when an email arrived.

“In two months Steve Pinker will be cruising the Amazon with a group sponsored by the Center for Inquiry (CFI) .”

I've been a Steve Pinker fan ever since I first met him on one of his many book tours two decades ago.  At that time he was promoting The Language Instinct (the book that launched his career as neuropsychology's Explainer-in-Chief.)

( The Language Instinct is so good I've taken it on many back-packing trips — every single item goes on a weight scale. My figure of merit for literature is infotainment per kilogram .)

I also  ran into Steve when I was in London in 2002 (escaping my house during a remodel.)

He was presenting his new book The Blank Slate in an animated debate with British novelist Ian McEwan who took the opposite side.

I've since found out the secret of Steve's brilliance — plain old hard work.

If you haven’t heard of him go to Steve's Harvard website.  (I haven’t quite forgiven him for deserting his rigorous academic colleagues at MIT for the fluffy, flippant effetes at Harvard .)

The Center for Inquiry (CFI)

On to CFI – the Center for Inquiry . This is a group dedicated to the notion that personal beliefs and public policy should be informed by scientific evidence. (If you find that to be axiomatic, join the club. But you and I are in a small club.

The world is under attack by bozos! Somehow in 2016 Trump and his deplorables prevailed over sixteen other contenders. So much for liberal democracy versus China or Russia!

A crucial piece of CFI's mission is embodied by their journal Skeptical Inquirer — exposing frauds, quacks, and ignoramuses including psychics, faith-healers, astrologers. They're fearless truth-seekers! 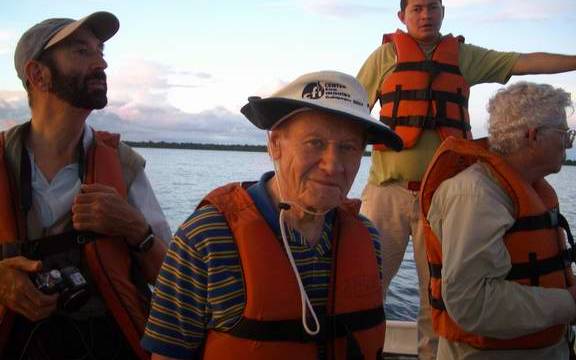 Professor Paul Kurtz: the founder of CFI and its guiding light 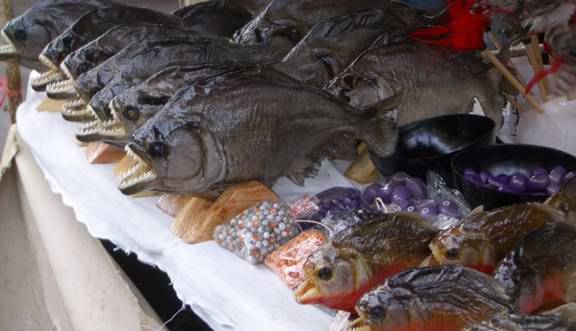 Piranhas (after being plasticized for souvenir buyers)

Piranhas are renowned for their razor sharp teeth and aggressive meat eating.

Like lawyers they randomly attack with the slightest provocation.

Dr. Kurtz mentions that CFI pays thousand of dollars a year for litigation insurance.  To their credit CFI’s provocations are not slight.

When Skeptical Inquirer prints an expose of an alleged charlatan, as they did, with Uri Geller, the “spoon-bending psychic,” they hit with a sledge hammer and expect an attack by the charlatan’s lawyers. Bravo CFI! Bravo Dr. Kurtz!

(But, even lawyers, just like the piranhas and leeches, are part of the Great Web of Life.)

(Note to my pals in environmental law - you are Nature's stewards, of course.) 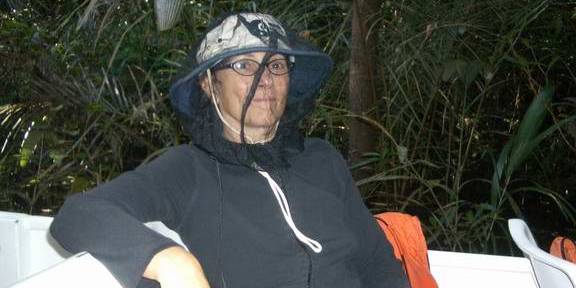 Toni narrowly missed being Director of the National Organization for Women in their national election. Above she appears in the traditional veil worn by members of NOW. (It also keeps away mosquitoes.) 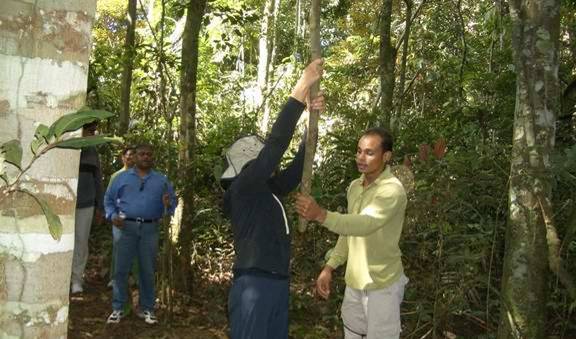 Toni swings on an Amazon vine (like Tarzan's Jane)

Steve's camera equipment appears in the series below. 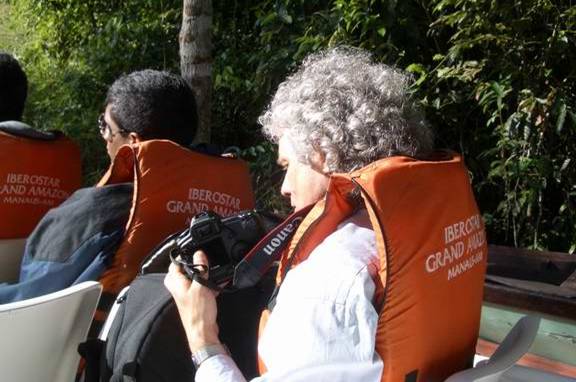 Steve (in common with Newton and Einstein) belongs to the Luxuriant Flowing Hair Club for Scientists.

But here, it's the camera equipment that gets our attention. He tells me that his frequently outmoded equipment gets sold on E-Bay.

We will see the result of that photographic devotion soon below  (stay tuned). 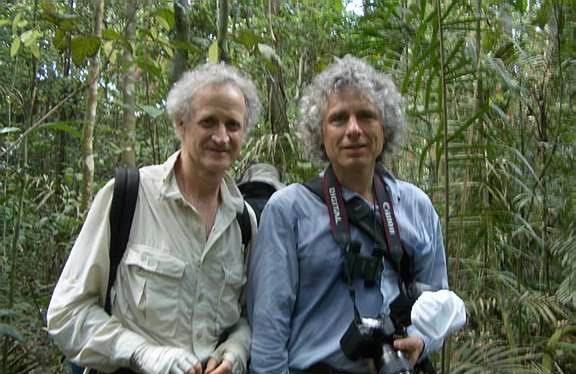 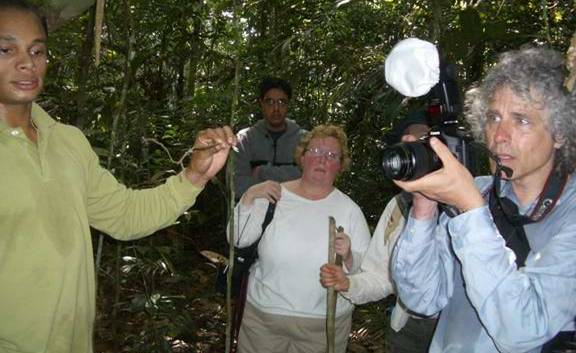 The pictures that he took of the Amazonian flora and fauna are worthy of National Geographic. (Mine taken with my old first-gen digital camera are mainly not worthy of display.)

(The worried looks above are induced by the one inch long bullet-ant that Steve is viewing.   Some combination of the bite and the formic acid feels like you were hit by a bullet.)

But I did get this nice sunset showing Melissa, my part-time co-dance instructor.

( I brought an iPOD full of sambas, chachas, and salsas to teach the troops some Latin dances.) 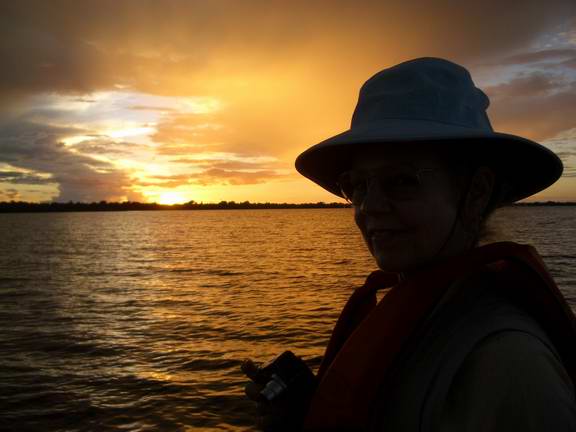 And the picture below showing my friend, Dr. Alan Meyer, a retired Kaiser gastroenterologist, also from California. 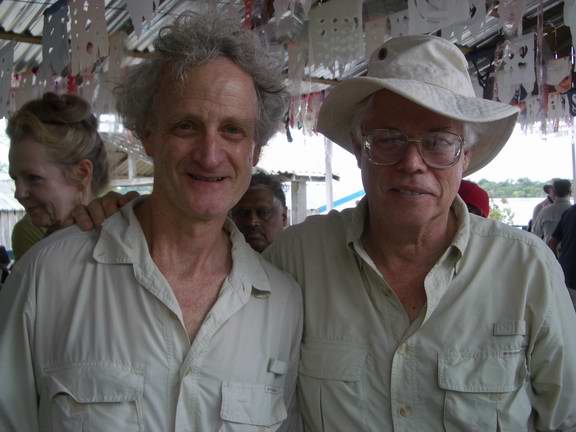 This could be an ad for Kaiser, an ad for a gay retirement home, or an ad for Ex Officio SPF 50 jungle shirts. This was all purely coincidental (honest!) What else are you gonna wear in the hot, humid Amazon?

And below - one of my rare, good fauna fotos — a Pink Amazon River Dolphin.

And finally, these pictures. 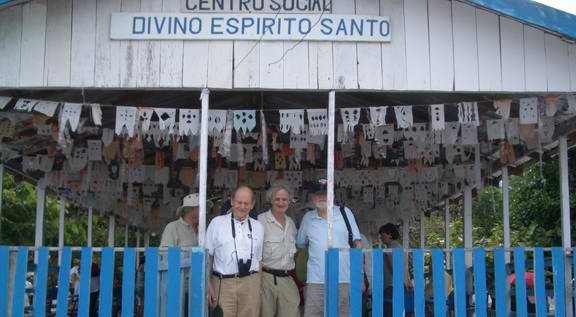 The caption on the Social Hall reads “The Divine Saintly Spirit” — a clear reference to SAINT PAUL, the DIVINE — patron saint of atheists.

And this one of our entire band of traveling skeptics and secular humanists. 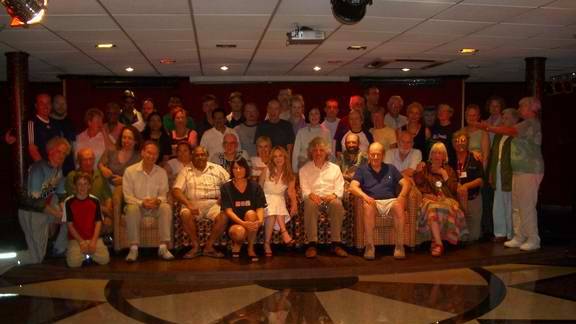 I presented my photo set recently to a group of friends one of whom asked,

“why did CFI, Paul Kurtz, and Steven Pinker go to the Amazon?
(rather than, say, to Hoboken, New Jersey?)”

There are several prosaic answers. Here’s the one I prefer.

A central focus of CFI is on planetary ethics. What better place than the Amazon to appreciate the majesty and beauty of the natural world — a world that increasingly must be protected by the wise stewardship of a group of forward-thinking elders, who transcend (and reject as out-moded) national, ethnic, and religious ideologies.