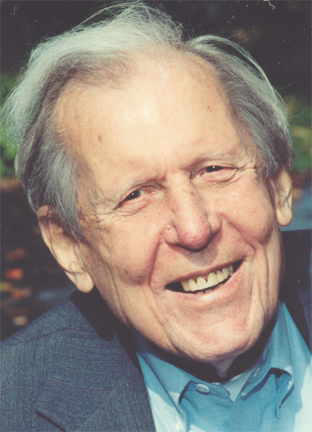 (My heroes are those who have fought courageously to advance great societal causes and who have done so at great personal sacrifice.)

An obituary in the New York Times provides a brief biography. Summaries of his key works and ideas appear at his website.

And here — a summary of his Earth Spirituality .

I first became acquainted with his work when he and co-author Brian Swimme presented The Universe Story in 1992.  Their book is a retelling of  cosmogenesis and the evolution of life that emphasizes the incredible creativity of the Universe.

In this view Berry was influenced by his intellectual predecessor Fr. Teilhard de Chardin, whose work, The Phenomenon of Man , follows a similar line. Indeed, Dr. Berry was president of the American Teilhard Association for over a decade.

Like his predecessor, Fr. Teilhard, Fr. Berry seemed to have an uneasy relationship with the Church. Teilhard (one of the greatest Catholic intellectuals of the twentieth century) was defrocked and forbidden from publishing (like Galileo) during his lifetime. Similarly, Fr. Berry's stands on birth control, environmentalism, and cosmogenesis were at loggerheads with Church doctrine.

Like Teilhard before him, Berry attempted to bridge the world of spirit with the world of science. While the notion of imbuing the Universe with spirit is not without controversy - to say the least - the view that the Universe is a random collection of elementary particles that just happened to congeal into hydrogen, then stars and galaxies, then heavy elements and molecules, through replicating molecules, then to prokaryotes  -  up to butterfly wings - seems to be leaving something out. That's part of the intellectual gap that he bridged.

Berry sided with the evolutionists in the Creation vs Evolution debate, but it was his sheer wonderment at the unfolding of the Universe that he brought to the table.  In this sensitivity he shared the passion that drove our great astronomers and cosmologists from Copernicus, to Galileo, to Newton, to Einstein - sheer wonderment at the raw fact of existence.

In Berry's writings this wonderment became awe at the sacred powers of cosmogenesis.  If postmodern man considers the Universe as nothing but a blob of matter ripe for human exploitation that is of little importance. It is not yet within our power to terraform Mars, to mine the asteroid belt, or to transform the planets into Dyson spheres. Unfortunately, that is NOT the case with Earth.

The desacralization of Earth in part with the complicity or perhaps simply benign neglect of science has had tragic consequences.  Present day mankind, unlike our paleolithic stock, is the key force that is now destroying Earth's capacity to sustain life.

In his 1999 volume, The Great Work , Berry directly takes aim at mankind's principal guiding institutions: legal institutions and governments, corporations and media, scientists and engineers, religions and universities.  All have been subjugated to the notion that humanity is the supreme holder of rights and privileges on Earth. Each has promulgated the view that Earth's resources are here solely for the unlimited consumption of mankind.

The result has been an unmitigated disaster as we have diverted the planet's rivers, stripped its topsoil, poisoned its atmosphere, mined its oceans to oblivion, and killed its flora and fauna.

If there is doubt that spirit played a part in cosmogenesis, there is no doubt whatsoever that lack of global consciousness is now destroying the habitability of Earth .

During his presentation of The Universe Story in 1992, Fr. Berry related a charming parable that has stuck with me.  We have institutions called the United Nations and the World Court.  Occasionally, when nations commit horrible atrocities they are sanctioned by the UN and the criminals are tried in the World Court. This happened with Nazi Germany, with the former Yugoslavia, and with Rwanda.

Now suppose we had an institution called the

As in all other aspects of consciousness, we are always ready to accept the stories spun by our brains and culture. As the liver secretes bile, the cortex is the organ that lies . Humanity's rights and privileges derive not simply from our great linguistic ability, but principally from our position of power and our naive belief in our own public relations campaign on behalf of ourselves . The death and destruction of Earth's species is a consequence of their lack of effective p.r. .

I am delighted to see that Thomas Berry's call for a sacred view of Earth - and the respect and deference which it entails - has been picked up by religious leaders as well as by scientists.  The recent Harvard declaration by environmentalists and evangelists is a hopeful sign of this direction. Another great reason for hope is the popularity of websites devoted to ecologic concerns (see, for example, Mongabay) and the increasing numbers of NGO's devoted to rescuing the natural world (see for example the highly efficient , Nature and Culture International )

If we are to turn around the environmental crisis, it will only be with the devoted efforts of all our institutions: the religious as well as the academic, the corporate as well as the political. Thomas Berry's Great Work is just at its start.