The James Webb Space Telescope (JWST) launched on Christmas Day, 25 December 2021. And, what a Christmas present it was — thirty years in design, fifteen years in construction, thousands of engineers employed, and ten billion dollars spent.

The JWST has been well described in numerous publications. (I always start with (and donate to) Wikipedia.) My purpose here, as always, is just to share some of my favorite write-ups, YouTubes, and personal stories involving the JWST. (Summer, 2022 update: Don't miss this spectacular PBS, NOVA documentary on the JWST which premiered in July 2022: Ultimate Space Telescope. (almost three megaviews on YouTube.)

The Webb is an international collaboration among NASA, the European Space Agency (ESA), and the Canadian Space Agency (CSA). So, the best website describing the JWST is NASA's. 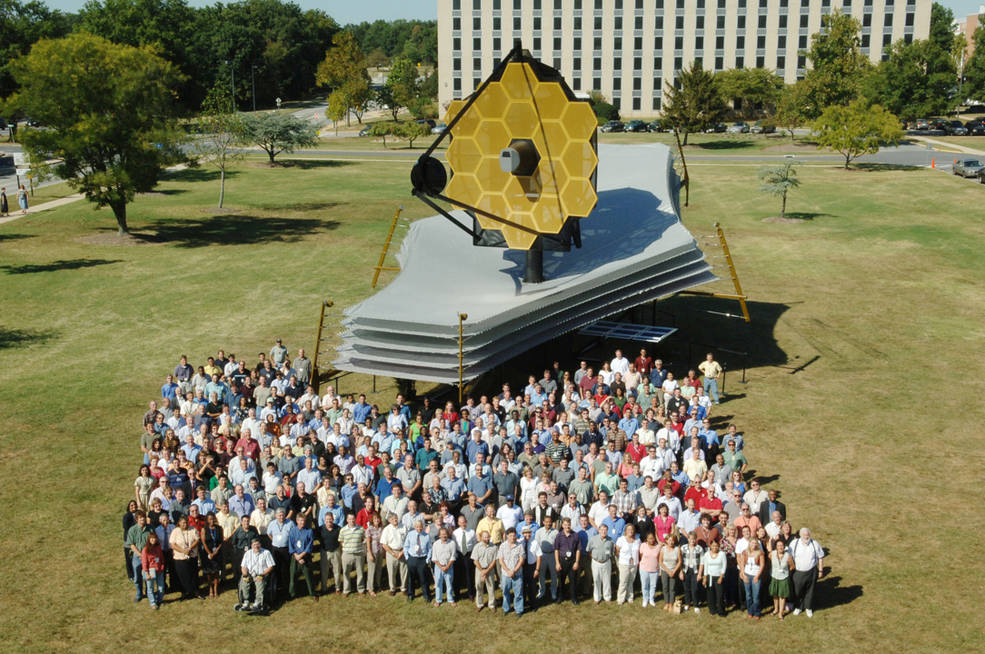 The JWST team assembled at NASA's Goddard Lab in Maryland

My next door neighbor, Mike, a senior Lockheed engineer has been vibration testing the JWST for several years. He places various components on a shake table to make sure they can withstand all the thermal and launch stresses. This has involved successive trips to Goddard Space Flight Center in Maryland, to Northrup in LA, and to JPL in Pasadena. He and I have been awaiting the launch for over a decade.

I initially started following the JWST's progress at its inception 15 years ago. It was regularly discussed in lectures at the SETI Institute in Mountain View, California.

Several of my favorite space bloggers deserve your attention. In random order — Astrum is a consistenly excellent YouTube site. For example, here is Astrum's Alex McColgan showing the Webb's Fascinating Deployment from Start to Finish. The intricacies of these events have had the science world on edge since the Chistmas Day launch. (As I write this on 2 Jan 2022 tensioning of the sunshield has just begun following the successful unfolding of the shield's five Kapton layers.) The shield must keep the infrared-sensitive instrument pack at a cool 40 degrees Kelvin (that's minus 233 degrees Celsius.)

I regularly listen to physicist Prof. Brian Greene's World Science Festival. Here this superb panel of scientists discuss the Webb's science goals. I've despaired at the improbability of successful deployment. Now it seems that success is just around the corner.

On 8 January 2022 NASA held a press conference to make this major announcement. After launching on Christmas Day exactly two weeks ago the JWST has deployed all its major subsystems. The latest milestone was the locking into place of the two side wings of the primary mirror. Now all eighteen hexagons of the primary mirror are in place. Where is Webb? (Here's the fast answer in one image.)

Over the past two weeks the JWST has had to accomplish depolyments involving 344 single-point failure devices (the failure of any one of which would have doomed the entire mission.) This was an outstanding achievement. How do you achieve that kind of reliability? The brief answer is by using shape-memory alloys as explained here at Northrup Grumman's JWST website.

30 Jan 2022: Over a month has gone by since the JWST launched and everything has gone perfectly. The Webb is now about 150,000 km from Earth in an elliptical orbit around the L2 Lagrange point where it will collect its data for the next two decades. In this YouTube video, Christian Ready of Launch Pad Astronomy explains the importance of the L2 position and how Webb will maintain this "orbit around nothing."

5 Feb 2022: Rollout of the JWST has been as smooth as silk! Now begins the process of aligning all eighteen hexagons in the Webb's primary mirror so that they all come to a sharp, overlapping focus. That process will take place over the next three months and is described at NASA's JWST website.